Head gaskets are expensive to repair and can ruin an expensive engine if not dealt with immediately. However, Ledom’s Repair has many years experience working on these critical gaskets. Not only that, but our repairs are long-lasting.

What Is Head Gasket Failure? 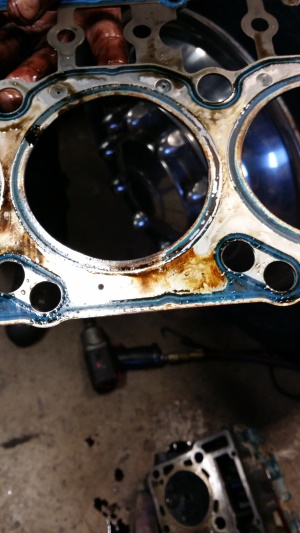 First, what is a head gasket?

This component is a critical part of any modern engine. Most engines have two major components – a block and a head. The block usually contains most of the rotating and reciprocating parts such as the crankshaft and the pistons and connecting rods. The block is often cast in iron, but aluminum blocks are becoming more common.

The head contains the valves and valvetrain components like the camshaft on overhead cam engines, combustion chambers and ports for intake and exhaust. The engine will have a single head on in-line engines and two heads on vee-type engines. Most heads are cast from aluminum.

Finally, the head gasket is a highly-engineered gasket that goes between the head and the block, sealing combustion chamber and cooling water passages.

Head gasket failure is when the gasket deteriorates and allows cooling water to infiltrate combustion chambers or the when seal between adjoining cylinders fails and the two cylinders lose compression. In either case, this failure is devastating to the engine and the engine will most likely overheat and/or run so poorly that it can’t power the truck.

What we do first is make sure that your head gasket is the issue.

Depending on how bad the failure is, getting the right diagnosis can be difficult. If the gasket is just starting to fail, then the signs may include white smoke coming from your vehicle’s exhaust or your engine may overheat. If the gasket is completely finished, then your car may not run at all or there may be a lot of white smoke coming from your exhaust.

If you are driving and the gasket blows, then you have to keep an eye on the temperature. Your engine can become severely damaged due to high temperatures. The sooner you stop running the engine after a gasket has blown, the better the odds are that it can be rebuilt at the top without running into any major issues.

Ledom’s Can Replace Your Head Gasket

In addition to replacing the failed head gasket, we will check for warping of the head and block surfaces, as well as look for cracks in the head.

Sure, these checks take a little more time, but if we don’t check for these things, then you could end up paying a lot more in the long-run. We want to ensure the new head gasket will last for years, which is why these checks are necessary.

Give Ledom’s Repair a call today if you think that you may have a head gasket failure.